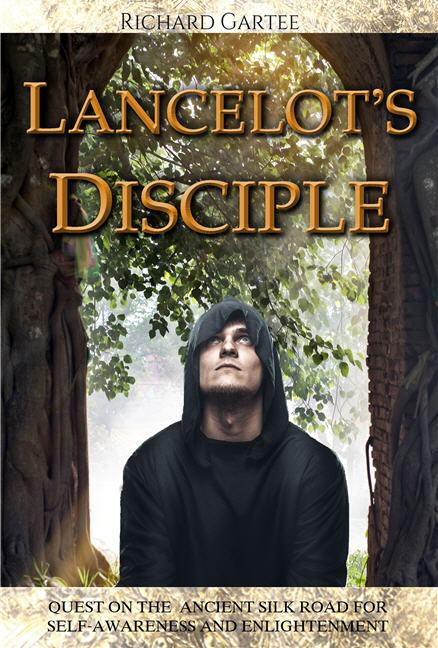 Quest on the Ancient Silk Road for Self-Awareness and Enlightenment

Read an excerpt using Amazon’s “Look Inside” feature.
Click on this link, and then click on the book cover displayed on the Amazon page.

In Lancelot’s Grail Sir Lancelot forsook his armor for a monk’s habit and made his hermitage in the woods behind the Abbey of St. Benignus where he completed his quest for the Holy Grail.

Frith and Alura are brother and sister who discovered Sir Lancelot living as a hermit, uncovered his knowledge of the Holy Grail, and trained as his disciples. Now their story continues.

When Lancelot’s spiritual mantel consecrates Alura, Frith is left wondering why the same didn’t happen to him. As she becomes established in her seat of Self, Frith resigns himself to remain at the abbey and watch over his sister.

In this compelling sequel, Jacob, a Jewish merchant sent by their father, comes to take Frith on a journey along the ancient Silk Road. A reluctant Frith leaves the Christian abbey he has always called home to sail with Jacob to the Mediterranean city of Tyre.

With four knights for protection, the men caravan to Samarkand, the Central Asian capital of the silk trade. There they meet the Sultan, a wealthy collector of Oriental holy men.

Frith is invited to study at the Sultan’s newly formed mystery school, where he is tutored by a Taoist, a Buddhist, and a Hindu Swami. Overwhelmed by metaphysical experiences he receives from them, Frith becomes nearly catatonic during the journey home, causing Jacob to consider revealing hidden Jewish mysticism to set Frith right.

Once back in Britain, Frith must sort out his confusion, attain the Holy Grail, and reconnect with his saintly sister waiting at the abbey.

Visit the Lancelot’s Grail web site to read a discussion with the author on the inspiration for both novels and sample chapters of Lancelot teaching Alura and Frith.